The Challenge of Mobility in Brazilian Cities 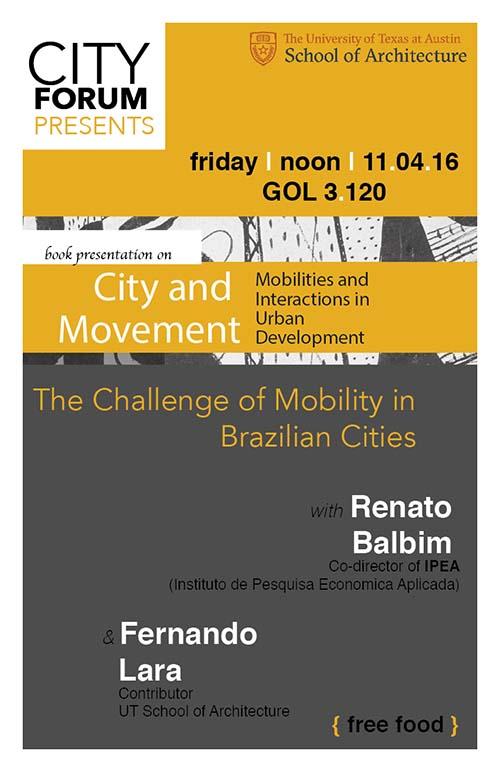 Our daily commutes interconnect places in the city and also structure our relationships, while also defining construction standards for our living areas. With a realistic view of possible scenarios for the future of our cities, an awareness of the ongoing process of climate change, and engaged in fine-tuning public policies so that they contribute to the construction of cities for all citizens, rather than cities for automobiles, Ipea signed a cooperation agreement with Institute for Transportation and Development Policy (ITDP-Brazil) and joined the quest for effective urban mobility upgrade solutions. We now have the pleasure of sharing some of the outcomes of this partnership. The topics addressed here extend beyond the issue of transportation: this publication has the merit of showcasing a systemic overview of urban mobility, spreading outside daily commutes to encompass social, residential and job mobility, among other aspects.

PhD in Human Geography at USP (2003), researcher at the Institut Français d'Urbanisme (France, 2001), a specialist in urban restructuring the University of Paris I Pantheon-Sorbonne (France, 1998), a specialist in Urban Public Policy at ENA (École national d'Administration), Paris (France, 2013). Since June 2009 is technical Planning and Research IPEA, where he was technical advisor to the President and Board Project Coordinator of Studies and Policy Regional, Urban and Environmental (DIRUR / IPEA). Currently represents the IPEA in the Council of Federal Affairs of the Presidency, in the Centre of Public Consortia and the Federation, the National Council of Cities and the Interministerial Working Group for Urban Mobility Pact. In addition, coordinates the research of the urban area of ​​the IPEA with the Agence Française de Développement and the ITDP. Since 2012 it is part of the Board of the Journal Editorial of the National Association of Public Transport (ANTP). It was the Cities Alliance World Bank consultant in 2005. He was a university teacher (substitute) at the Universidade Estadual Paulista (UNESP, 2003), in the Department of Anthropology, Politics and Philosophy, and the University of Brasilia (UNB, 2004), Human Geography course . He worked in various positions in the Ministry of Cities (2003) coordinated work teams involving local governments, ministries and international organizations.

Fernando Luiz Lara is a Brazilian architect with degrees from the Federal University of Minas Gerais (BArch, 1993) and the University of Michigan (PhD, 2001). Prof. Lara's interests revolve around Latin American 20th century architecture with emphasis on the dissemination of its values beyond the traditional disciplinary boundaries. His PhD dissertation on this topic was expanded into a book: The Rise of Popular Modernist Architecture in Brazil, published in 2008 by the University Press of Florida. In his several articles Prof. Lara has discussed the modern and the contemporary Brazilian architecture, its meaning, context and social-economic insertion. His latest publications look at the modernist vocabulary and spatiality being appropriated by the humblest favela dwellers.

A member of the Brazilian Institute of Architects and the Brazilian DOCOMOMO, Lara has also been active in his native country as a critic, researcher and educator. A licensed architect in Brazil, Lara has designed many structures, alone or in partnership with others. His current interest in the favelas has turned into opportunities to engage with public policy at the municipal level as well as collaborations with local firms designing public spaces in informal settlements. In 2005 he founded Studio Toró, a non-profit devoted to the challenges of water conservation and urban flooding in Latin America.  At the University of Texas at Austin Fernando Lara teaches seminars on 20th century Latin American architecture and urbanism, as well as studios related to the continent's current urban challenges.