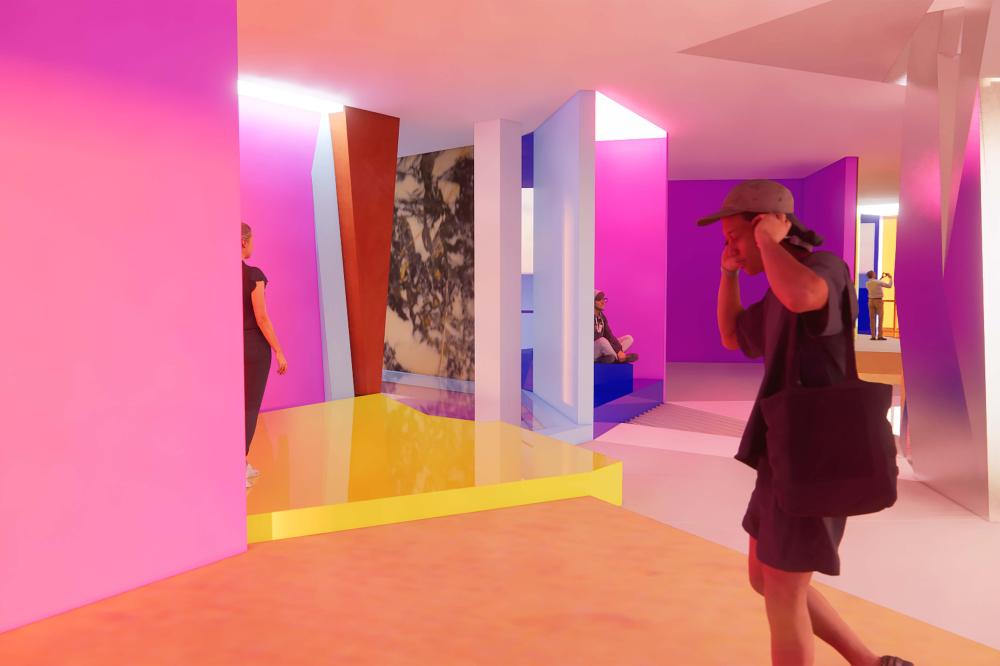 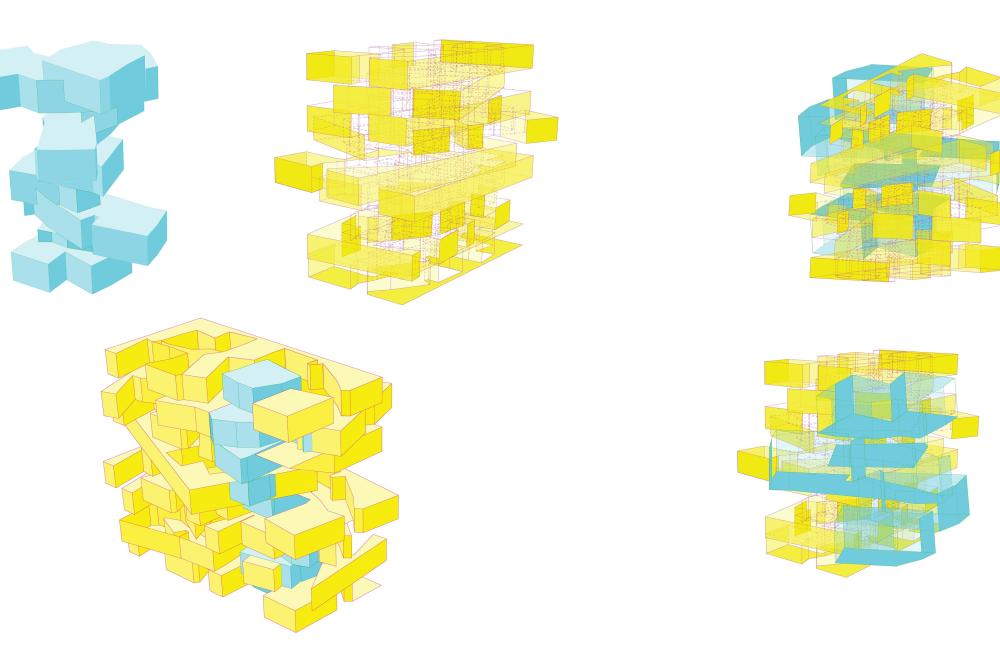 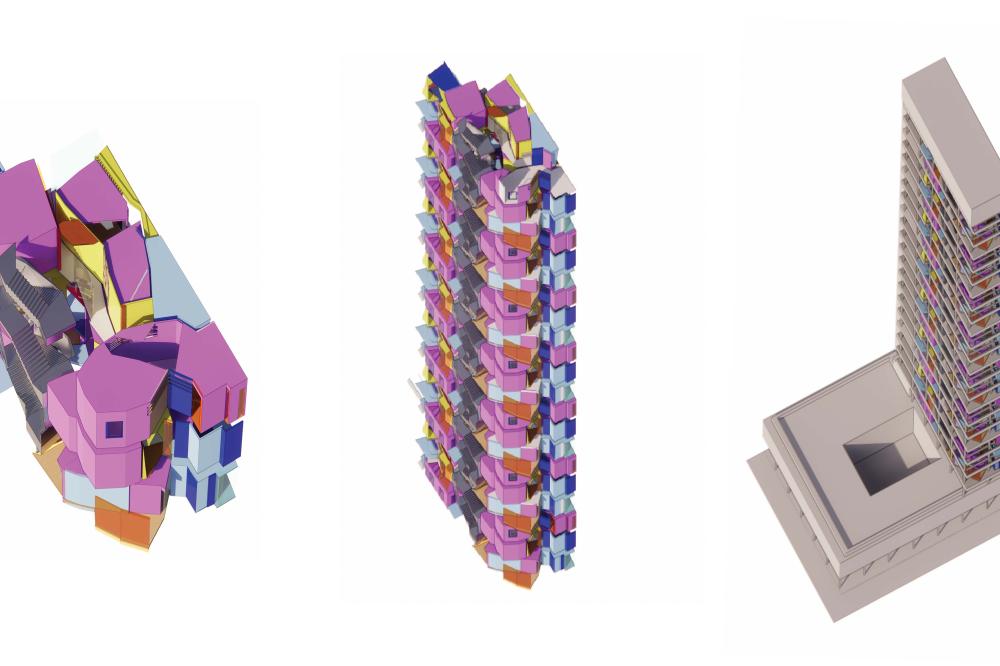 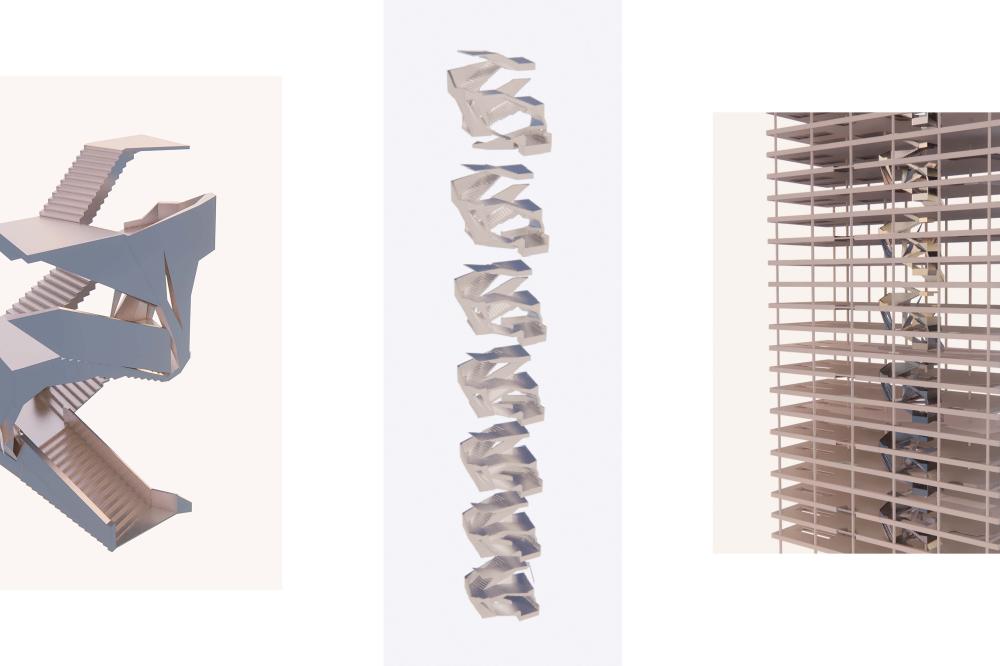 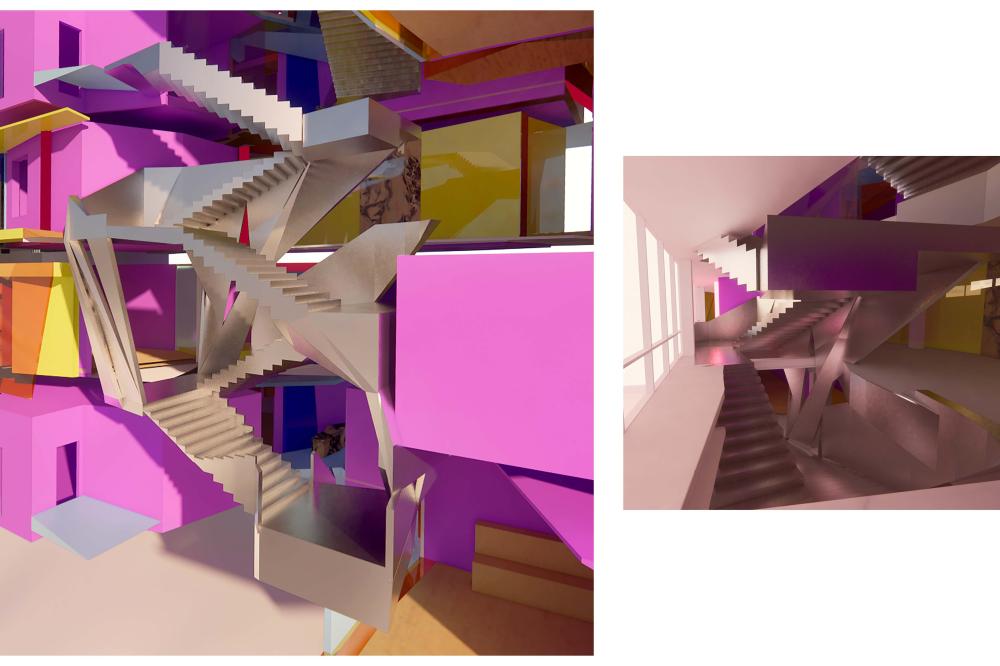 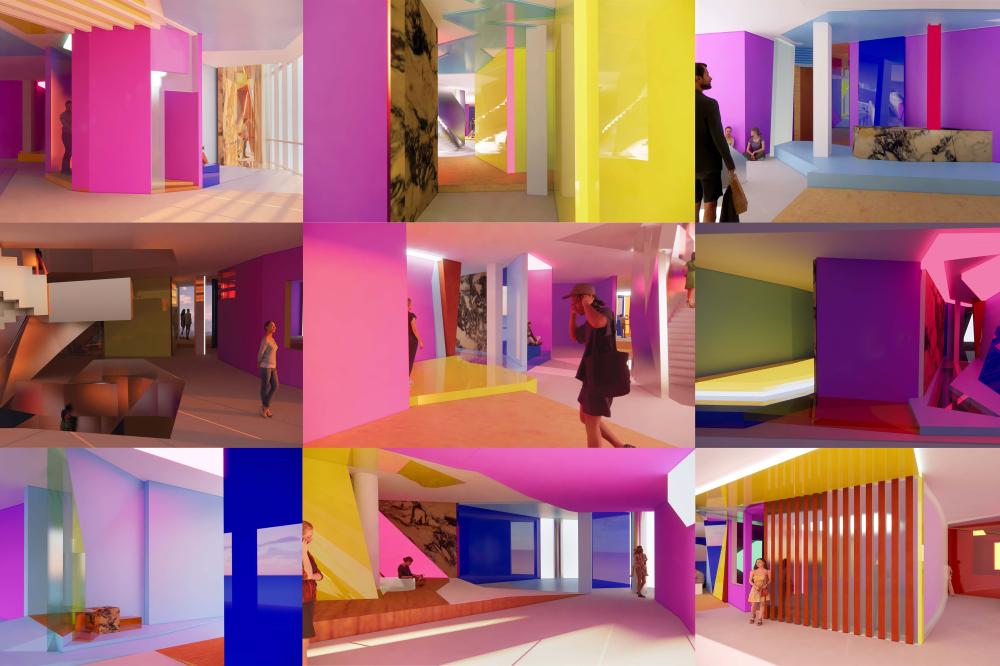 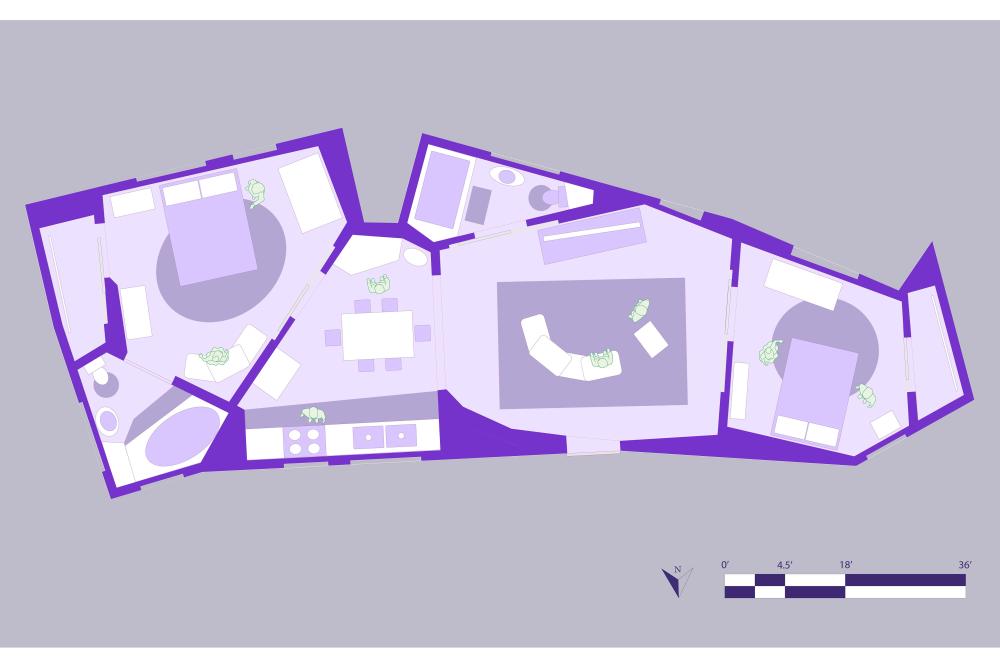 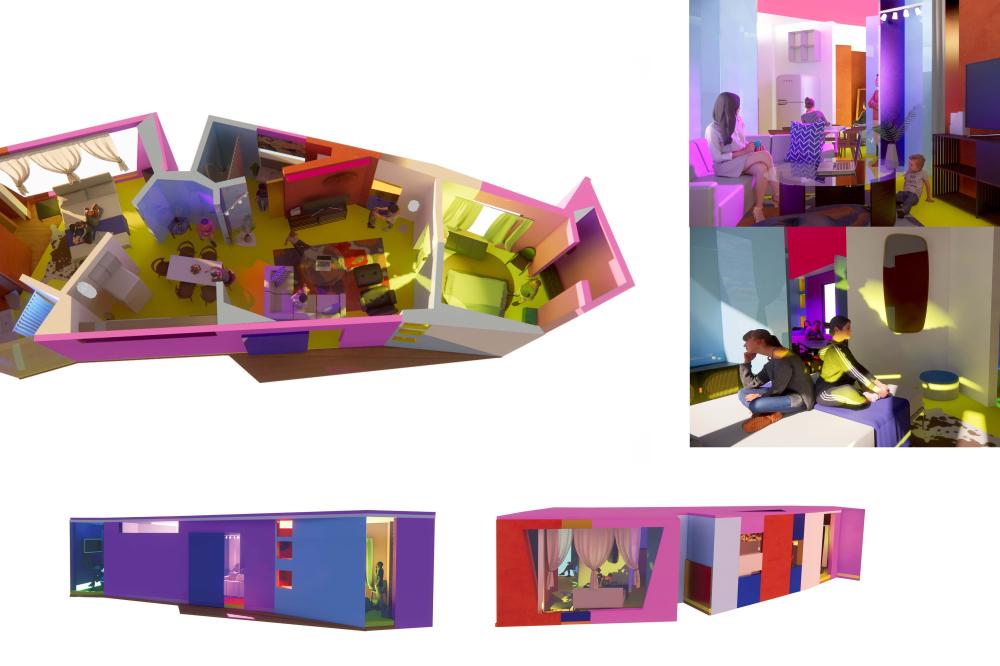 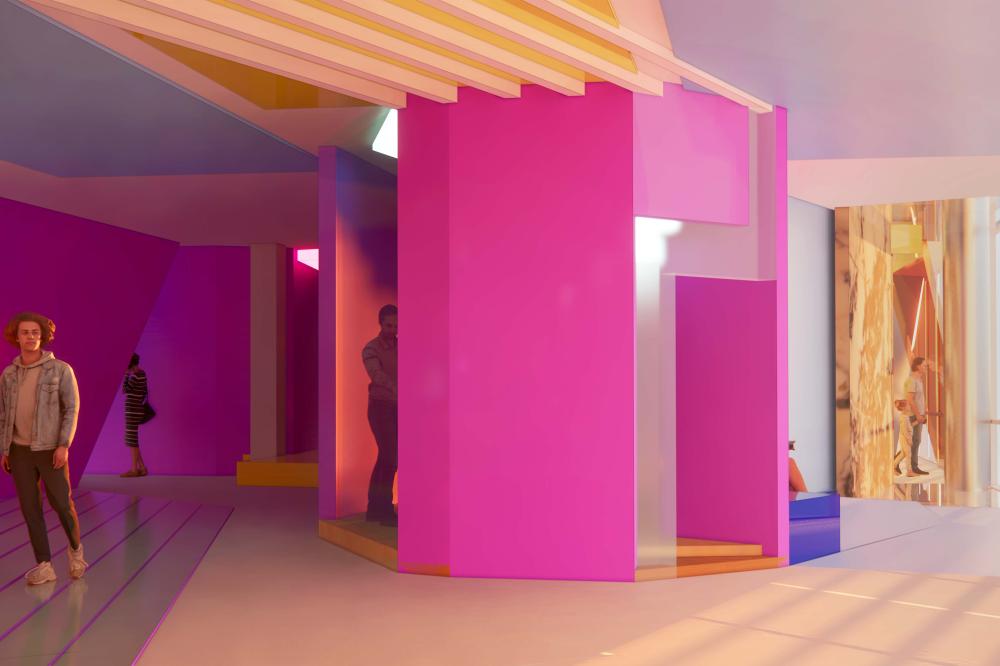 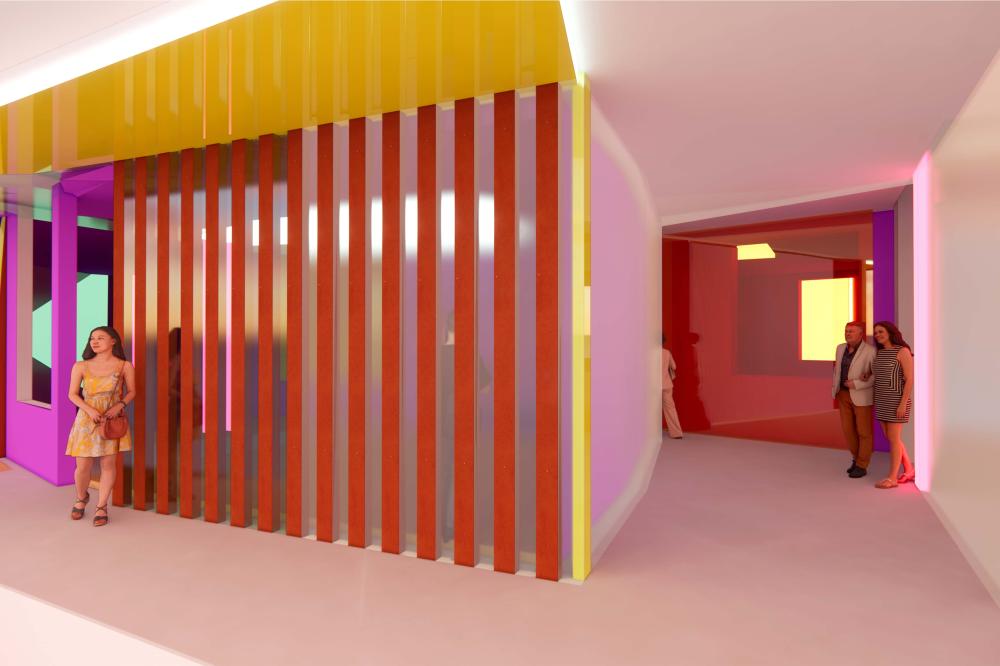 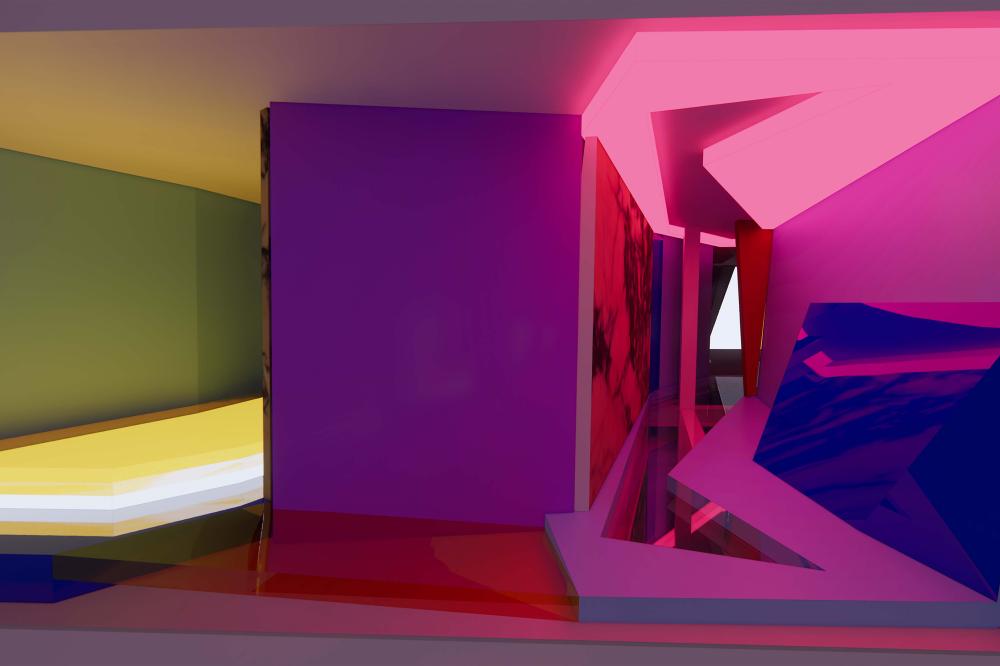 When challenged to propose a remodel of the Lever House in New York, I initially prioritized the formal and aesthetic qualities of my layout, an approach informed by insights and techniques acquired from earlier foundational projects. I encouraged myself to focus on logically configuring the overall composition independently of any prescribed context or programmatic syntax and restrained myself from critiquing the realism of its wildly oblique, multifaceted appearance. I integrated my volumetric forms within the provided Lever House template only after I had surpassed this raw, formative stage. Though this was a laborious adjustment both conceptually and logis­tically, I enjoyed the serendipitous moments I uncovered by correcting misalignments. Most of the snapshots I exhibit were accidental atriums manifested by the partial demolition of my original framework.

I consider the stairs the most imperative element of this project as they catalyzed my departure from handling the design as an art object, thereby allowing it to become more complex, evocative and experience-oriented. Without this vertical conduit, the solid units and margins between them (also modeled as solid) would otherwise appear stationary, nonreactive, and atemporal. The sequential nature of a staircase, however, inherently conjures alternative implications and possibilities that were absent from my design in its adolescence-namely movement, duration, and most importantly, occupation. Its uniform treads also function as a breath of normalcy within the other­wise surreal, exaggerated structure.

I isolated the unit that seemed least likely to be successfully furnished or comfortably lived in and challenged myself to transform it into a plausible human dwelling. I ventured to be as ambitious with the interior of this unit as I had been with the common and circulatory areas surrounding it; I took risks with large chunks of pattern, color, and light as well as unconventional applications of glazing, metals, and stone. The idea was to develop the module in a way that was sensational and eccentric yet still reserve enough familiarity and program to be recognized, identified, and experienced as a home. I implemented this incongruous harmony throughout each of the three floors, striving to make them convincingly habitable and accessibly realistic while preserving a generous degree of artistic freedom. These final stages were especial­ly gratifying to me because they were truest to my own creative agenda; I am a painter, a collage artist, and also make experimental darkroom prints. I said to myself, "if my art could become an occupiable building, what would that look like?"